One of the most vibrant literary gatherings in the world takes place each year in Medellín, Colombia: The International Poetry Festival of Medellín or Festival Internacional de Poesía de Medellín. Founded in 1991, the Festival has consistently offered poetry as an eloquent counterweight to the violence so much associated with the city. It was awarded a Right Livelihood Award in 2006, a prize sometimes referred to as the “Alternative Nobel Prize” with a citation that it was given “for showing how creativity, beauty, free expression and community can flourish amongst and overcome even deeply entrenched fear and violence.” The award and the Festival have taken on special significance in the months since this summer’s gathering. This year when the Nobel Prize Committee announced that Colombian President Juan Manuel Santos will receive this year’s Nobel Peace Prize, the news came just days after Colombian Laureates of the Right Livelihood Award had called for a ‘Yes’ vote in the failed October referendum on the peace deal with the FARC. 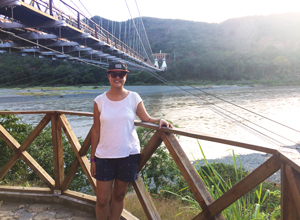 Tampa Review Fiction Editor Yuly Restrepo was born in Medellín. In 2001, at the height of Colombia’s civil war, she and her family moved to the United States, where they were granted political asylum. Yuly is now a naturalized citizen of the United States, and a writing professor at the University of Tampa. In the summer of 2016, she traveled to Medellín to work on and do research for her novel-in-progress, which is set in Colombia and deals with the country’s civil war. During her time there, she attended and wrote about the poetry festival, which coincided with the signing of a peace agreement between the Colombian government and the FARC, which has resulted in a cease fire, after over fifty years of violence. Yuly is shown at left in a photo from the trip at the foot of the Puente de Occident, or Bridge of the West, about 50 miles north of Medellín, Colombia. —Ed. 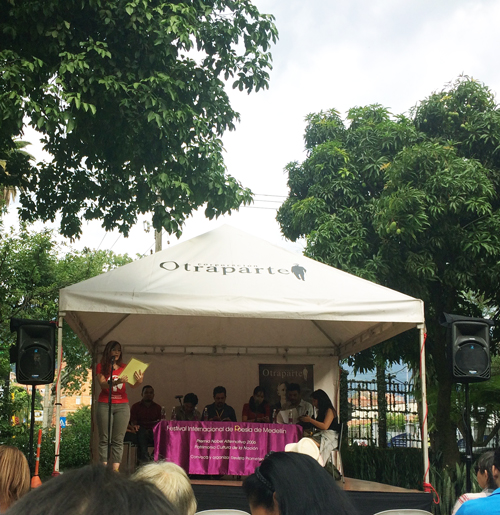 The first event I attended at this year’s 26th Annual International Poetry Festival of Medellín was a reading meant to showcase contemporary Colombian poetry. On an overcast Sunday afternoon, seven young Colombian poets gathered at the Otraparte Museum/Café, created and built for the purpose of preserving and spreading the legacy of the great Colombian writer Fernando González. They performed their work to an attentive, if small, audience. But the Festival was just getting started, and there was a significant community event competing for attendance that afternoon.

The first reader, local costumbrist poet Lina Trujillo, thanked the audience for attending on an afternoon when one of the city’s soccer teams, Deportivo Independiente Medellín, would play the championship match of the Colombian tournament. The reading featured poets from Medellín and other Colombian cities, and poets who, like many other Colombians, live outside the country. Hector Cañón stood out among them, with an undeniably environmental focus, as well as some work on the violence that has besieged Colombia for so long. This last aspect of his work is evidenced in lines such as “I come from seeing fathers and mothers crying/over the deaths of their children/with fallible anticipation.” Another standout was Fredy Yezzed, who in “The Unpublished Diary of the Viennese Philosopher Ludwig Wittgenstein” writes, “1.1 Poetry is a garden: a garden that speaks of other gardens.” 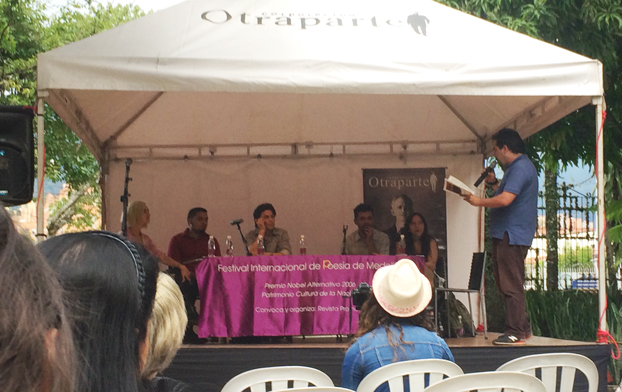 Later that night, as I rode the metro amid screams of celebrating soccer fans clad in red and blue jerseys, I thought about the absolute attention of the audience at Otraparte, and I remembered my first poetry festival six years earlier. Back then, people packed public squares and let the rain soak them, sometimes to listen to poets who read in English or Dutch, whose work no one had translated for them. I realized that, even if the numbers didn’t compare, poetry fans in Medellín could be as fervent as the people waving flags on the street and sending fireworks into the night sky to celebrate the team’s victory.

The following days reaffirmed this feeling. The festival, which took place June 18-25, 2016, featured more than 110 poets from countries ranging from Burkina Faso to Australia, including representatives from indigenous nations, such as the Mapuche from Chile and the Zoque from Mexico. It consistently had well-attended or packed venues. The poets spent their week in Medellín offering readings, lectures, workshops, and conversations to audiences from many age groups and walks of life. Additionally, the festival held film screenings, musical performances, and plays in venues ranging from universities to museums to public parks.

This year the festival had two main themes: the work of French poet Arthur Rimbaud and the Eleusinian Mysteries. To expand upon the latter, Boston University’s Carl A. P. Ruck, co-author of The Road to Eleusis: Unveiling the Secret of the Mysteries, participated in several events to celebrate the memory of this ancient city and its rites. As for Rimbaud, Colombian writers like Albeiro Montoya and Juan Manuel Roca, as well as French poet Alain Borer, discussed the poet’s work and life.

The festival, organized and sponsored by Prometeo, one of the oldest literary magazines in Colombia, has grown exponentially since its inception in 1991. That year, sixteen Colombian poets decided to hold an event called “A Day with Poetry” at the iconic Cerro Nutibara, a hill located square in the center of the city, better known for its tourist attraction, the Pueblito Paisa, a model of the traditional small Antioquian town.

Prometeo became involved in the festival the following year, when thirty-seven poets from eight European and American countries participated. That year, the event also began to integrate musical performances, as well as lectures and film screenings. The unexpected attendance, about 20,000 people total, led the organizers to improvise readings on the streets, using megaphones instead of microphones, for the people who crowded outside the packed venues.

This year, in addition to panels and readings focusing on the legacies of Rimbaud and Eleusis, the festival featured readings that gathered poets from diverse ages, nations, languages and styles. On Thursday evening, I attended a reading featuring Albeiro Montoya (Colombia), Adriana Paredes (Mapuche Nation, Chile), Keki Daruwalla (India), Antonio Trujillo (Venezuela), and Alain Borer (France). By now, the festival organizers have started to provide those who write in a language other than Spanish, and cannot translate their work into Spanish themselves, with both a translator and a local actor who reads their poetry for the audience in Spanish. At this particular reading, the audience was delighted to hear and understand the images in Daruwalla’s poem honoring Federico García Lorca, first in English and then in Spanish: “Sandwiched between your rivers/‘one lament and the other blood’/the land will flame like a tongue/of fiery green/threading the Sierras.” The audience also enjoyed Borer’s extremely brief, surprising poems and his delight at being in Medellín. 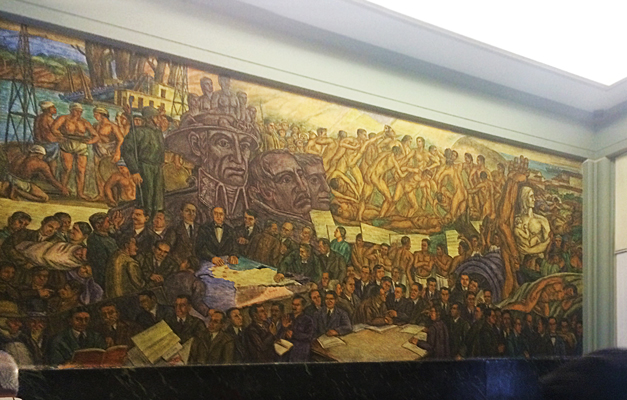 The next day I attended Colombian poet Leo Castillo’s lecture on “The Damned Poets.” The lecture took place at the Sala del Concejo of the Antioquia Museum, a room that features an imposing mural by maestro Pedro Nel Gomez entitled La República, which depicts important events in the liberation and development of the Colombian nation. The room was packed with about 150 people, and the lecture turned into a spirited debate. When it became evident that Castillo was more interested in discussing details of the poets’ private lives, such as Paul Verlaine’s proclivity for sex workers, or Rimbaud’s possible homosexuality, than about their work, the audience took it upon itself to become an active participant in the conversation and demand a better quality of work from the presenter.

A few days later, I went to EAFIT University’s campus to listen to the work of Rubén Darío Lotero (Colombia), Judith Crispin (Australia), Hugo Mujica (Argentina), and Samm Monro, aka Comrade Fatso (Zimbabue). The Colombian poet read short vignettes from everyday Colombian life, while the Zimbabwean entertained the crowd with his spoken word style focused on the social and political ills of his country. The Australian, with her expansive, dreamlike poetry, was also well received. However, it was the Argentine, with lines such as “He fell weightless/like eyelids,/at nightfall or a leaf/when the wind rather than whip away, sways,” which he wrote about the death of his father, who won over the audience completely. 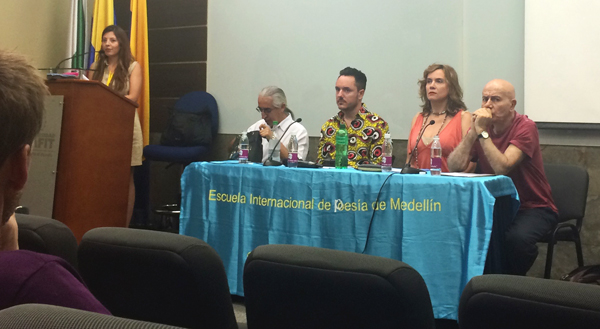 The closing ceremony, a reading marathon featuring most of the participating poets, took place at Parque de los Deseos, and again was packed. People in attendance wore t-shirts with Rimbaud’s likeness printed on them and carried around festival tote bags and the festival edition of Prometeo magazine, which includes work by all the participating poets, in English and Spanish, as well as Carl A. P. Ruck’s essay “Memory of Eleusis.”

I had to ask myself why in a country where the population reads an average of one book per year, this festival has such massive success, and why attendance has soared to hundreds of thousands. I’ve pondered the question in the days since the closing ceremony, and I think the answer goes back to what the poets who founded the festival had in mind when they got together for the first time in 1991. In that year, war was on every Colombian’s mind. The cartel wars, the war on drugs, the war between the guerrillas and the government. In 1991, bombings, drive-by shootings, political assassinations, and massacres in public areas were daily occurrences in Medellín. War was on everyone’s lips, and fear was in everyone’s thoughts. So the festival came as a response to that fear. It started because the city’s spirit was broken and in dire need of repair. It began because poetry was a way to create and reaffirm life in a place where death was our daily bread. In a city that still had some of its darkest days ahead, poetry served as a way to get closer to the light. It has been so for twenty-six years in a row.

On June 23, 2016, during the week of the festival, the Colombian government and the FARC signed a peace agreement, after more than fifty years of civil war. The rebels agreed to a final cease fire and future reintegration into society. The country met the possibility of peace with joy and trepidation. After all, the war has left hundreds of thousands dead and millions displaced from their homes. It has left more than fifty years of destruction and suffering. The trepidation will continue for some time to come, but so will the joy. And through it all, in the city of Medellín, there will remain the life-giving power of poetry—and the masses who will come to be part of an event that stands against war and fear and death.