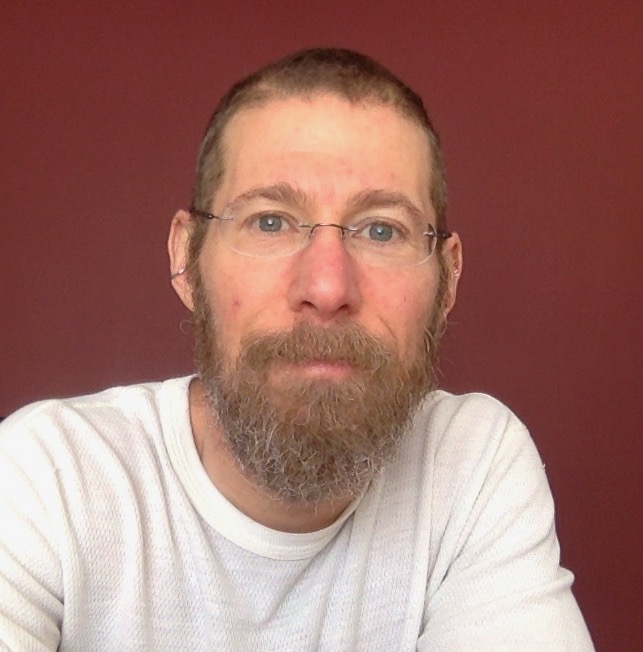 Benjamin S. Grossberg is Director of Creative Writing at the University of Hartford.  He has published four books of poems including My Husband Would (University of Tampa, 2020), a Foreword Indies Book of the Year and winner of the 2021 Connecticut Book Award; and Sweet Core Orchard (University of Tampa, 2009), winner of the 2008 Tampa Review Prize and a Lambda Literary Award. His poems have appeared widely, including in the Pushcart Prize and Best American Poetry anthologies, Poetry Daily and Verse Daily, and the magazines Paris Review, Kenyon Review, Southern Review, Ploughshares, and The Sun.

The Houston nightclub, long shut down, where
I once spent Friday nights.

Someone shoots up Heaven,
both bars and the small
dance floor in the back.
But the patrons, all just
my memories now,
ethereal, wisps of smoke
and soul, don’t notice
or care. The bullets
spray through them
where they cluster at
the second bar, blurring
their bodies as they flirt
and throw back cocktails
that turn to vapor
in their mouths.
Heaven’s dance floor
is a sway of boys. It’s still
early nineties here,
so pastel disco lights flash
to “Strike it Up” and “100%
Pure Love.” Patrons dance
as only memories can,
pressing so close they pass
through each other
at the lips. When bullets glide
through them, their bodies
mingle at the entrance wounds.
Fridays, cover charge
is a canned good, a donation
for the local soup kitchen,
and booze, a pour of smoke
in a plastic cup, costs only
twenty-five cents till eleven.
On a night like this, sultry, with
boys lined up to enter, a can
of Kroger peas or hominy
in hand, the click
click click of an empty
magazine, his last, is lost
to disco. He throws down
the gun, its cold solidity,
and charges the crowd.
But the boys turn to mist
still laughing at their own jokes
and settle once he’s passed.
Spent, he collapses unnoticed
against and through
one of Heaven’s walls,
and tumbles right out of it.
At the bar, one of the boys
drifts toward another
a few stools down, the swirl
of him blown back
by the movement.
All night, he’s been watching
a guy—Michael—who he
will continue to love
long after they’ve parted ways.
He’s just found courage
to go up and say hello.

Eat McDonalds. Hate cats and refuse to pretend otherwise,
even with my cat who she’d call “butt stain” and flick off
the couch with her thumb and forefinger. Be named
after Viola from Twelfth Night because I was delighted by

Bonham Carter in the Trevor Nunn film. Her friends
would call her Lola because she’d have somehow discovered
The Kinks. Would she know I hate that song? My first
boyfriend said Don’t bury me when I observed we’d never

grow old together because of his HIV status. She’d have
dug his Wassily chairs—black leather strips over chrome
which looked like torture devices or sex apparatus.
He insisted they were comfortable. She’d have

plopped herself down in one and stretched her arms
along the armrests, asking, Where are you taking me for dinner?
It would only have seemed like they were ganging up on me.
I’d have bought her books, a bicycle, skirts the color of

forest moss in rain, to match our eyes. A watch pendant—
1920s reproduction decorated with seed pearl.
She’d have wiped wrenches with the crenelated skirts,
rolled her eyes and never worn the watch, but kept it

with the diamond studs in the locked drawer of her desk
until she sold both to buy an old Prius, to visit Tijuana
after graduation. I’d know because I’d have kept a key
to the drawer, which I still wouldn’t have told her about

even now, though she’d be a parent herself and doing
similar things. He once told me, my first boyfriend,
that the only loss he felt when he was diagnosed
was that he couldn’t have kids. He and I spoke

that intimately in bed, which I’m not sure people
do anymore. That’s the thing you’ll miss? I thought,
incredulous. He curled his head on my shoulder,
and I said I hoped he’d miss nothing. Viola, lower that shit

music and shut your goddamn door. My own parents use
expletives compulsively—they’re from New Jersey—
and did so throughout my childhood. One Seder, my brother
printed a picture of a woman fondling a gray stallion

and brought it to the table, where it rested on his Haggadah
until it caught my father’s eye. My mother was serving
gefilte fish, a tan, pocked loaf in translucent mucous.
With current drugs, even if he and the mother were both

positive, he could—the baby would be protected. These days,
when I bring Viola home for Passover, it’s disappointingly
sedate, but I’m unnerved anyway when she pokes
the gefilte fish with her finger, puts the finger to her mouth,

then eases a slice of the cold loaf onto her plate.
Since my mother and brother are eating it, too, I can say
nothing. Through the magic of Facebook, I know
he, at least, has found a husband. They recently redid

their kitchen in sleek checker-board marble. Shut
your own goddamn door, Dad, she screams from upstairs.
And it’s Lola, okay? LOLA. Their stainless fridge
has no drawings taped to it, just like mine.